PARIS — Iranian activists called for fresh nationwide protests over the death of Mahsa Amini, as the movement entered a fifth week on Friday despite a crackdown that has killed dozens.

Outrage over the 22-year-old’s death on September 16, three days after she was arrested by Iran’s notorious morality police, has fuelled the biggest wave of street protests and violence seen in the country for years.

Young women have been on the front line of the protests, shouting anti-government slogans, removing their headscarves and facing off with security forces in the streets.

At least 108 people have been killed in the Amini protests, and at least 93 more have died in separate clashes in Zahedan, capital of the southeastern province of Sistan-Baluchestan, according to Oslo-based group Iran Human Rights.

The unrest has continued despite what Amnesty International called an “unrelenting brutal crackdown” that included an “all-out attack on child protesters” — leading to the deaths of at least 23 minors.

There were fewer reports of people taking to the streets over Amini’s death on Friday, but hundreds of men were seen protesting after weekly prayers in Zahedan, in online videos verified by AFP.

Despite blocked access to internet services and platforms like Instagram and WhatsApp, activists issued an online appeal for a huge turnout on Saturday for protests under the catchcry “The beginning of the end!.”

They have called on people across Iran to show up at spots where the security forces are not present and to chant “Death to the dictator.”

“We have to be present in the squares, because the best VPN these days is the street,” they declared, referring to virtual private networks used to skirt internet restrictions.

In response, one of the Iranian regime’s main revolutionary bodies, the Islamic Development Coordination Council, has called on people to join a counter-demonstration after evening prayers on Saturday to “express their revolutionary anger against sedition and rioters.” 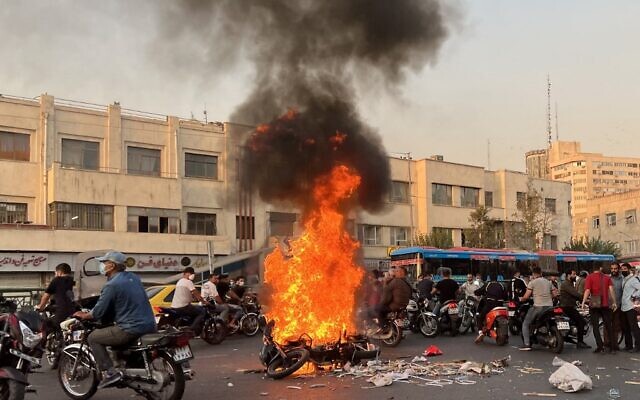 A picture obtained by AFP outside Iran, shows people gathering next to a burning motorcycle in the capital Tehran on October 8, 2022. (AFP)

The bloody crackdown has drawn international condemnation and new sanctions on Iran from Britain, Canada and the United States.

On Friday, his government condemned French President Emmanuel Macron for remarks in which he expressed solidarity with the protests sparked over Amini’s death.

He said it was “surprising” that France was condemning Iran’s security forces for dealing with “violent people and rioters” when it was threatening to use force in response to “labor strikes in the oil and gas sector” at home.

“This is clear hypocrisy,” he said. 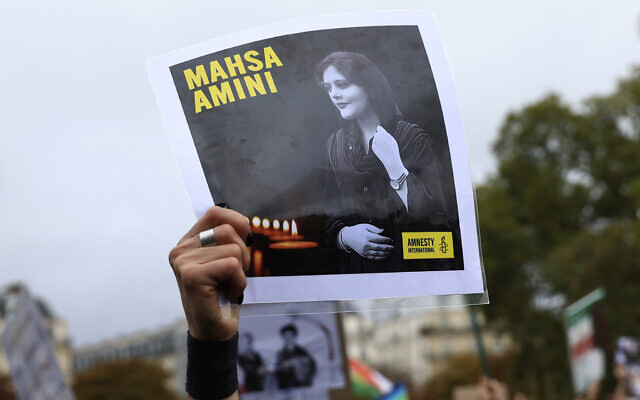 A protester shows a portrait of Mahsa Amini during a demonstration to support Iranian protesters standing up to their leadership over the death of a young woman in police custody, Sunday, Oct. 2, 2022, in Paris. (AP Photo/Aurelien Morissard, File)

Analysts say the multi-faceted nature of the Amini protests has complicated state attempts to quell them, which could spell an even bigger challenge to the authorities than 2019 demonstrations over a sudden fuel price hike.

Young women and schoolgirls have been seen staging flash-mob protests to avoid detection, as seen in video footage posted online.

The approach has reportedly forced security personnel to move around a lot and caused them to grow tired, as the protests look set to extend into a second month.

This week, a call went out to “retirees” of the Islamic Revolutionary Guard Corps for them to gather on Saturday given “the current sensitive situation,” according to a journalist at Shargh newspaper.

In response to the protests, the security forces have carried out a campaign of mass arrests that has netted young activists, journalists, students and even minors.

Schoolchildren have been arrested inside classrooms and ended up in “psychological centers,” Education Minister Yousef Nouri said this week, quoted by Shargh.

One girl has died due to internal bleeding after plain clothes armed forces invaded a school in Ardabil, Iran and beaten students violently. 10 more have been wounded. 7 other students were taken under arrest. #MahsaAmini #مهسا_امینی https://t.co/0EyECJb0GK

In a rare show of accountability, the Tehran police department said Friday that it will investigate the conduct of an officer following allegations of harassment during the arrest of a woman protesting Amini’s death.

It came after a video showed a male officer appearing to grope the woman from behind while arresting her, before she was eventually allowed to leave.

Some voices of support for the protesters have come from inside the country.

In an open letter published on its front page on Thursday, reformist newspaper Etemad called on Iran’s top security official, Ali Shamkhani, to stop arrests being made under “pretenses that are sometimes false.”

The Iranian authorities have organized their own rallies attended by women clad in black chadors, garments that cover their heads and bodies.

A bid to show they had the support of famous women unraveled overnight, after a photomontage of dozens wearing the hijab disappeared from a Tehran billboard within 24 hours of being erected as it featured some personalities known to oppose the headscarf.

We’re really pleased that you’ve read X Times of Israel articles in the past month.

That’s why we started the Times of Israel ten years ago – to provide discerning readers like you with must-read coverage of Israel and the Jewish world.

So now we have a request. Unlike other news outlets, we haven’t put up a paywall. But as the journalism we do is costly, we invite readers for whom The Times of Israel has become important to help support our work by joining The Times of Israel Community.

For as little as $6 a month you can help support our quality journalism while enjoying The Times of Israel AD-FREE, as well as accessing exclusive content available only to Times of Israel Community members.

Thank you,
David Horovitz, Founding Editor of The Times of Israel

Already a member? Sign in to stop seeing this