You’re invited! Join LifeSite in celebrating 25 years of pro-life and pro-family reporting at our anniversary Gala August 17th in Naples, Florida. Tickets and sponsorships can be purchased by clicking here.

NEW DELHI, India (LifeSiteNews) — Under the leadership of Western Latin and Eastern Syro-Malabar Rite Catholic bishops, India will observe its first National March for Life as a “Day of Mourning” for the millions of babies killed in abortion in the country over the last 50 years.

The March will take place on Wednesday, August 10, in New Delhi, the nation’s capital. Present will be Syro-Malabar Rite Archbishop Kuriakose Bharanikulangara of the Diocese of Faridabad, and Bishop Deepak Valerian Tauro, Auxiliary of the Archdiocese of Delhi and Chairman of the Pro-Life Commission.

The event will protest the country’s 51 years of legalized abortion since the Medical Termination of Pregnancy Act of 1971. According to Archbishop Kuriakose, since 1971, India has seen an estimated 15.6 million abortions every year, nearing a total of 800 million deaths of the unborn.

The “Day of Mourning” will include a 2.5-kilometer march to the Cathedral of the Sacred Heart in Delhi, concluding with Mass at the Cathedral and tolling of funeral bells in commemoration of the millions of dead killed in abortion. The demonstration is organized by CHARIS India, the official body of the Catholic Charismatic Renewal Services in India together with the Delhi Catholic Charismatic Service of Communion.

In preparation for India’s first March for Life, Kuriakose issued a circular letter to his diocese encouraging priests and lay faithful to witness to the sanctity of life by attending the March. The archbishop expressed “great joy and exultation at the reversal of Roe v. Wade (abortion law) in the United States of America,” and he said he “hope[s] to see a similar day in India.” He called to mind the sobering words of St. Mother Teresa of Calcutta about abortion, “We must not be surprised when we hear of murders, of killings, of war, of hatred. If a mother can kill her own child, what is left but for us to kill each other?”

1 have signed the petition.

Thank you for signing this petition!

Catherine Robinson, spokesperson for Right to Life UK, commented on the hope for the pro-life cause in India that has been sparked by the overturning of Roe v. Wade in the U.S. “It is an exciting time for the pro-life movement,” Robinson said. “As we’re seeing, the end of Roe v Wade presents an opportunity and a cause for hope because it demonstrates to countries like India that such unjust laws can be overturned. Hopefully, the March for Life in India will begin to create more of a pro-life culture, and India, too, can experience its own overturning of its abortion laws.”

Here is the full text of Archbishop Kuriakose’s letter. Bishop Tauro had written a similar circular letter in July.

I write to you with great joy and exultation at the reversal of Roe v Wade (abortion law) in the United States of America and hope to see a similar day in India. Last year, Cardinal Oswald Gracias as President of the CBCI wrote to the church in India calling for an observance of August 10 as a ‘Day of Mourning’. In this letter dated August 2, 2021 Cardinal Gracias wrote “I recommend that you do what is possible, keeping in mind that we are called to promote a culture of life.” Taking to heart this exhortation, CHARIS India, the official body of the Catholic Charismatic Renewal Services in India in collaboration with the Delhi Catholic Charismatic Service of Communion are organizing the first National March for Life in Delhi on August 10, 2022. This March for Life will include pro-life organisations, Diocesan Life Commission representatives, bishops, priests, religious, seminarians, the lay faithful and especially youth and teens.

I will be present at the event and we will be demonstrating in Jantar Mantar against the Medical Termination Pregnancy Act 1971, through which an estimated 15.6 million babies are killed every year in India by the grave act of Abortion. We will be praying and walking up to Sacred Heart Cathedral, Delhi. The demonstration will begin from 3pm to 4.30pm at Jantar Mantar after which there will be a Jericho March in the Cathedral premises following which the Holy Mass will be celebrated remembering the aborted souls at 6:30pm in Cathedral, later funerary bells will be rung in memory of the aborted souls. The flyer is enclosed herewith.

I request you to do the following:

1.Make the necessary announcement during the Sunday mass and encourage people to participate in India’s first National March for Life.

2.On 10th August, please observe the day as a “Day Of Mourning” and offer the Holy Mass for all the aborted souls slaughtered in the womb in the last 51 years in our country.

I look forward to your positive response. As St. Mother Theresa of Calcutta, our very own saint says, “We must not be surprised when we hear of murders, of killings, of war, of hatred. If a mother can kill her own child, what is left but for us to kill each other?” Earlier this year, we all prayed for the war in Ukraine to come to an end. Let us also pray that the war in womb also come to an end.

Thank you for your support and strong witness for LIFE! 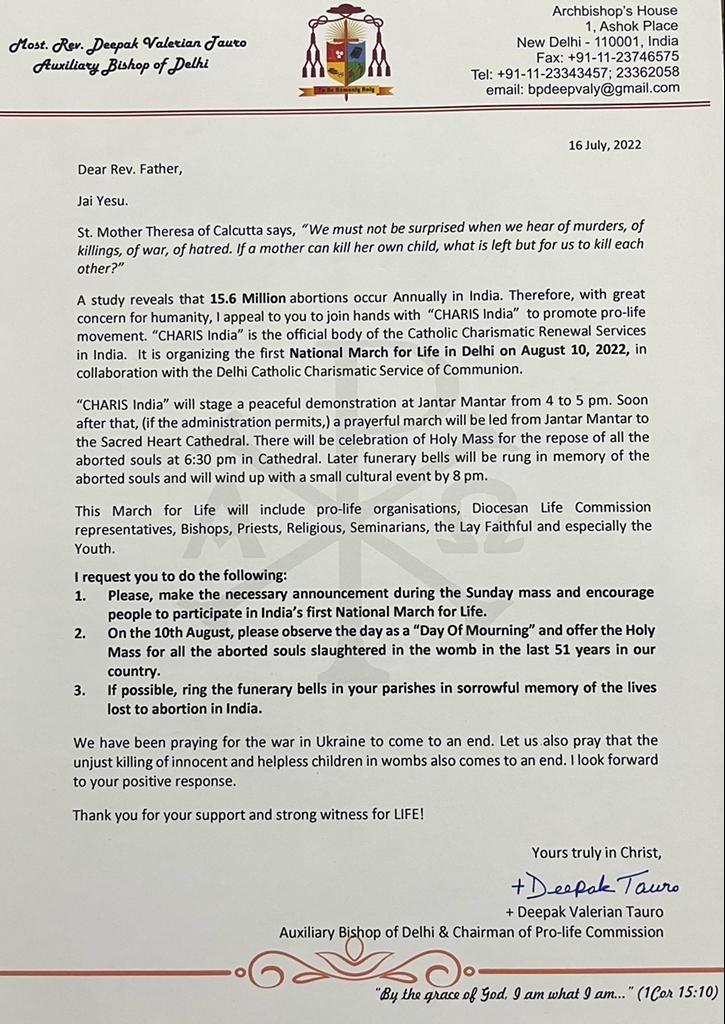 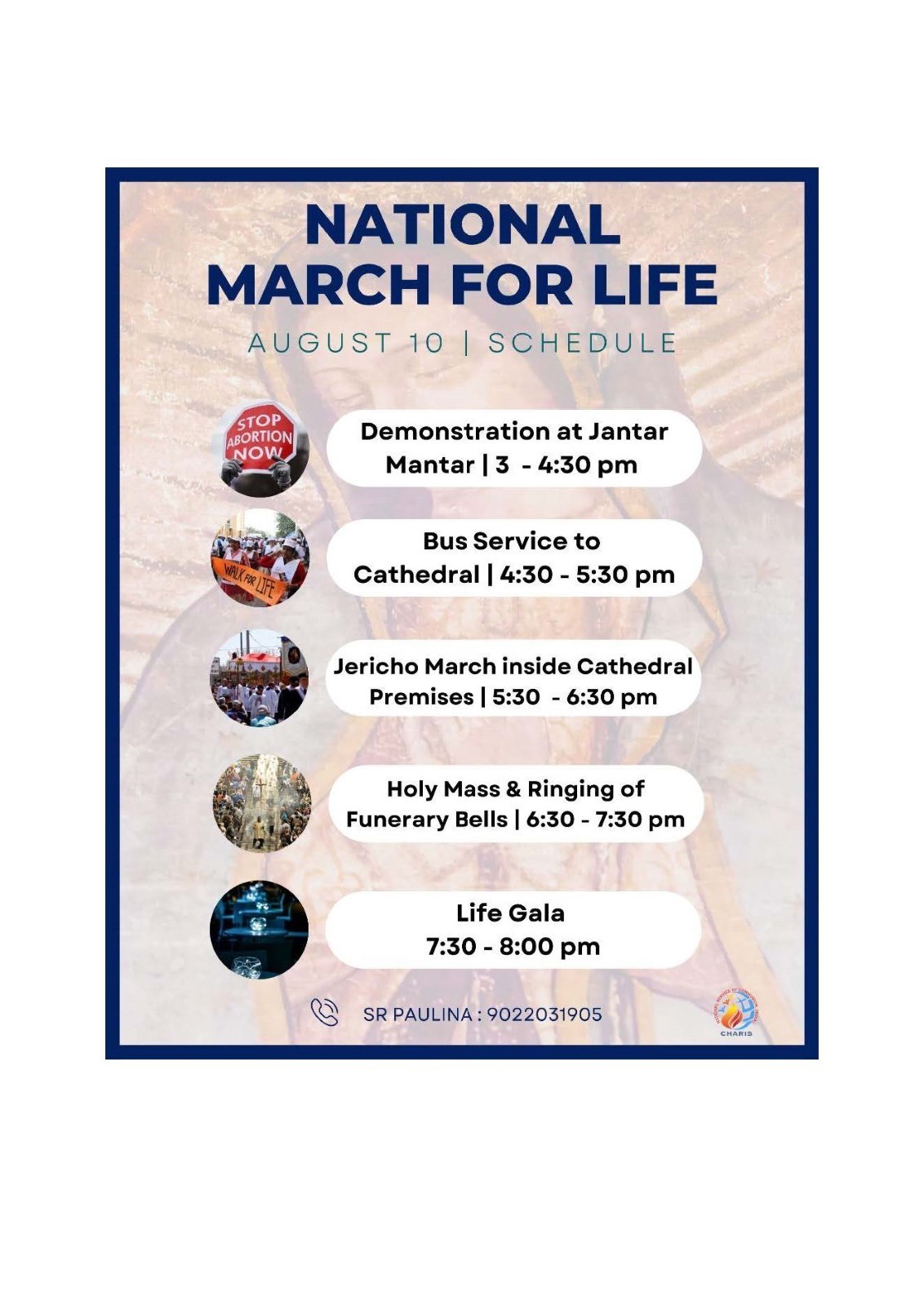 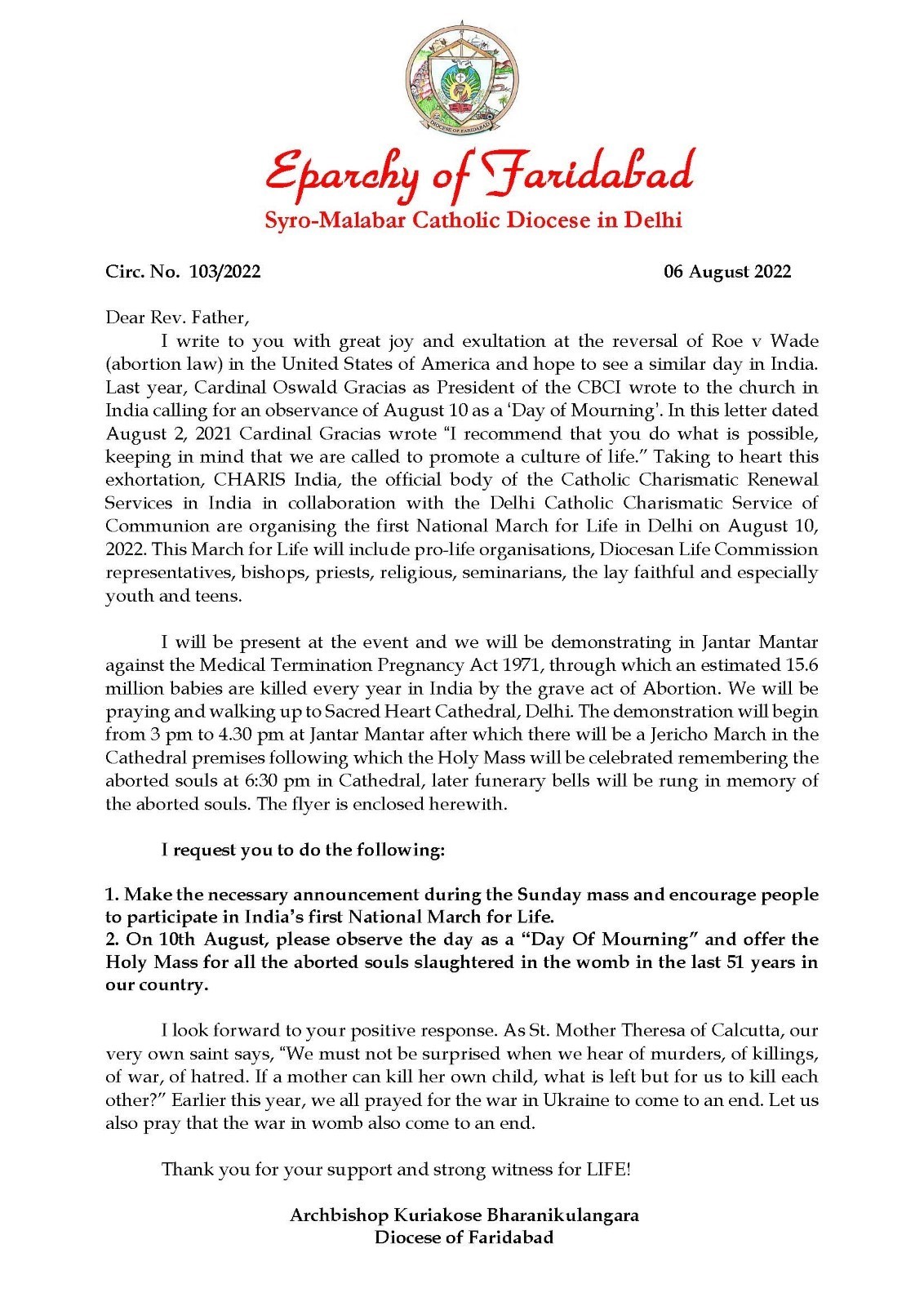 Letter of Archbishop Kuriakose on India’s March for Life

Letter of Bishop Tauro on India’s March for Life