Officials are checking 200 people in 27 states for exposure to monkeypox after coming into contact with a Dallas man who contracted the disease during a trip to Nigeria.

The man, who has not been named, was returning from Lagos, and had stopped in Atlanta, Georgia, on July 8 and 9 on his way to Texas – nearly a week before being diagnosed with the rare disease.

Monkeypox causes a blistering skin rash and feverish flu-like symptoms. It can be transmitted through respiratory droplets and body fluids.

After being diagnosed, the man was placed into isolation at a hospital where authorities say he is in a stable condition.

CDC officials said they are working with state and local health officials to monitor those who came into contact with the patient and follow up on them daily until the end of the month.

A man from Texas traveling back in the United States from Nigeria has been confirmed to be infected with monkeypox. Pictured: Skin lesions, which are are a common symptom of monkeypox 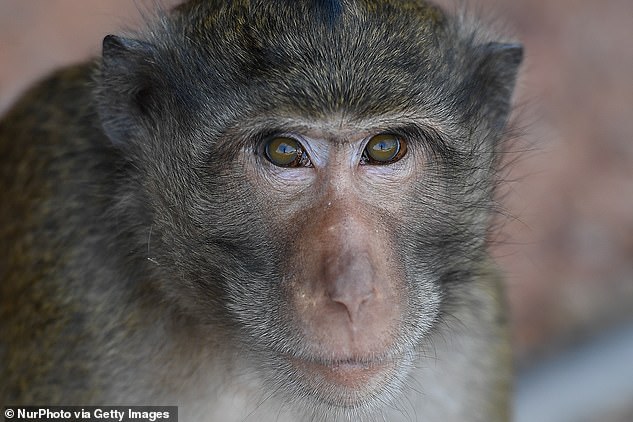 Health officials are working to find who may have been in contact with the man as he traveled while infected with monkeypox, first discovered in the crab-eating macaque (pictured)

The disease can be transmitted through respiratory droplets and body fluids.

No additional cases of monkeypox have been detected so far, STAT reported.

Those being monitored include fliers who sat within six feet of the patient or used the mid-cabin bathroom on the overseas flight.

Flight attendants, staff who cleaned the bathroom and family members who had contact with the man in Dallas are also being monitored.

Passengers who flew on the flight from Atlanta to Dallas with the man were deemed to have too short of an exposure period to be at risk, Andrea McCollum, the lead poxvirus epidemiologist at the National Center for Emerging and Zoonotic Infectious Disease, told STAT.

“We define indirect contact as being within 6 feet of the patient in the absence of an N95 or any filtering respirator for greater than or equal to three hours,” she said.

Incubation of the virus generally takes between one to two weeks.

People with more serious cases of the virus will often develop skin lesions, among other symptoms like rash and fever.

MONKEYPOX IS A RARE DISEASE THAT CAUSES RASH AND FEVER

Monkeypox is a rare viral disease which causes a blistering skin rash and feverish, flu-like symptoms.

The virus responsible for the disease is found mainly in the tropical areas of west and central Africa.

Monkeypox was first discovered in 1958, with the first reported human case in the Democratic Republic of Congo in 1970. Human cases were recorded for the first time in the US in 2003 and the UK in 2018.

It is found in wild animals but humans can catch it through direct contact with animals, such as touching monkeys, squirrels rats or other mammals, or eating badly cooked meat.

The virus can enter the body through broken skin or the eyes, nose or mouth.

It can pass between humans via droplets in the air, and by touching the skin of an infected individual, or touching objects contaminated by them.

Symptoms usually appear within five and 21 days of infection. These include a fever, headache, muscle aches, swollen lymph nodes, chills and fatigue.

The most obvious symptom is a rash, which usually appears on the face before spreading to other parts of the body. This then forms skin lesions that scab and fall off.

Monkeypox is usually mild, with most patients recovering within a few weeks without treatment. Yet, the disease can prove fatal.

There are no specific treatments or vaccines available for monkeypox infection, according to the World Health Organization.

Monkeypox is a rare but potentially serious viral illness that typically begins with flu-like illness and swelling of the lymph nodes and progresses to a widespread rash on the face and body,’ according to the CDC.

‘We have confidence in the federal, state and local medical professionals who are working to ensure that this virus is contained and that the patient is treated with the utmost care,’ Dallas Mayor Eric Johnson said in a statement.

Around 10 percent of cases of monkeypox end in death, though the strain the man has is less severe, and often has a 1 percent chance of death.

Six previous cases of monkeypox from around the world have been tied to travelers returning home from Nigeria.

Experts are not sure of the true origin of monkeypox.

The virus was first discovered in 1958 in crab-eating macaques.

The first case detected in humans was in 1970 in the Democratic Republic of the Congo.

It has since been discovered in many central and western African nations.

It is believed that the virus transmits from animals to humans when the animal bites of scratches a person.

It can also spread person-to-person by respiratory droplets in the air.

The disease has largely vanished, until a 2003 flare-up in the United States saw the virus return to humans.

The identity of the man who contracted the virus has not been revealed, and his case is not related to any other case of human monkeypox detected in recent years.

There are no specific treatments or vaccines available for the virus, though the smallpox vaccine is believed to have helped make it a non-problem in humans for many years.

Antiviral agents against the disease are currently being explored, though, according to the World Health Organization.

Other cases of monkeypox were detected in Wales last month, when at least two people came down with the virus in the northern part of the country.

The first ever cases of monkeypox in the United Kingdom were detected in 2018.